The queer behavior I observe happens when I’m sitting right on the boundary between inside and outside. It seems like a slew of interrupts are generated, even though the user limits are always configured to be single shot. The motor is enabled, but it flickers 0-4 counts while it’s commanded to be at the boundary position.

If I look at the sample counter for when the interrupt was created (using InterruptSampleTimeGet), I will see thousands of interrupts (that have been queued, I suppose) that trigger my handler even though the user limit that’s being triggered is a single-shot and is (presumably) no longer enabled. What’s more, the sample number for those interrupts is before the current sample (obtained from SampleCounterGet) when I configure/enable the other user limit.

In my application, I see the “inside-the-region” handler being invoked upwards of hundreds of times in a row. Then, after a couple seconds, I see the “outside” handler being invoked many times in a row. I would have expected it to alternate between inside, outside, inside, etc. for flickering actual positions at the boundary. The sample numbers (interrupt sample vs current sample in the handler) really begin to diverge as time goes on, as if the interrupts were generated long (seconds) ago.

It’s as if a bunch of interrupts are being queued, but I only expected a single one (single shot).
Are my expectations wrong? 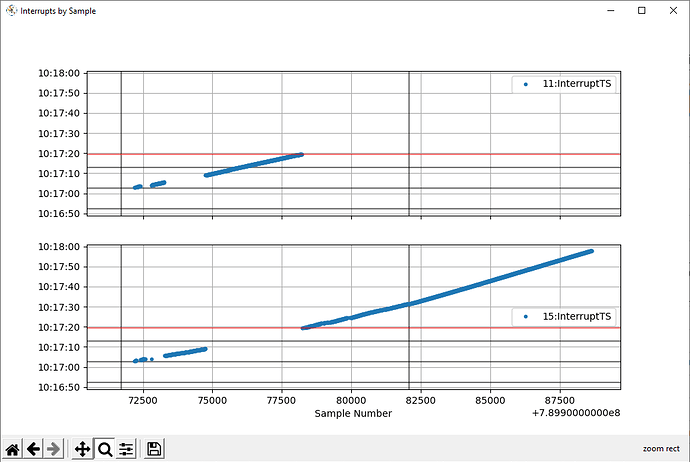 This is a plot of interrupt sample number vs time-when-handled. The leftmost vertical black line is when I commanded the axis to move to the target position (the edge of the region). The move might have taken half a second to execute. I waited 10 seconds, then (the rightmost vertical black line) moved it outside the region by a small, but sufficient amount. Again, a quick move.

That whole time, a bunch of interrupts came in, but the difference between the sample number when the handler last processed an interrupt and the interrupt sample number grows. In this example, the time disparity is upwards of 40 seconds (due to the length of time it takes my handler to run, presumably). This is what leads me to suspect that I’m processing long-queued interrupts. 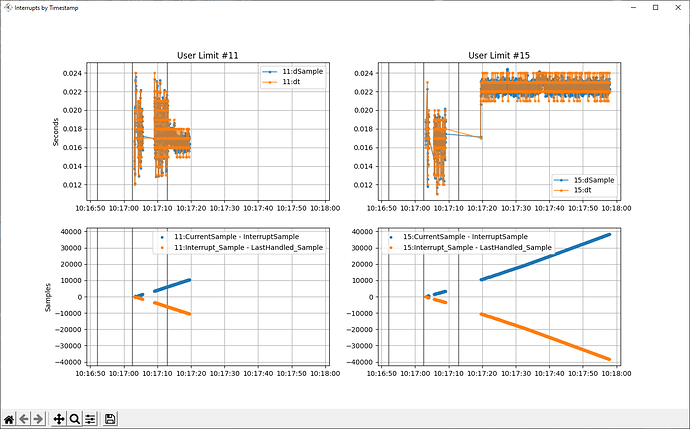 The bottom two plots show the time the interrupt was handled vs:

(I’m sorry the data I have is not specifically organized for this issue, but it’s what I can do without drastically redesigning my app.)

So, the primary/first question is: If I configure a user limit as a single shot, should I expect only to get a single interrupt for it?

Note: I’ve done some pretty heavy editing of this post. Starting now, I won’t change anything prior to this reply.

To answer your primary question, you should expect only a single interrupt if you configure a user limit as a single shot. We are currently working to reproduce this behavior, and will reply with our findings as soon as we can.

Here are some other details that may be pertinent, though I have no reason to think that they are.

I added a check in each of the (“inside” and “outside”) handlers: if you were the last handler run, don’t reconfigure the user limit.

When I do this, I see better behavior, but I still see 1-2 “extra” interrupts come in (for which I no longer twiddle anything about the user limits for). Here’s a visualization. (#11 is “inside” and #15 is “outside.”) Note that the user limit for which the interrupt comes in alternates (more) between 11 and 15. 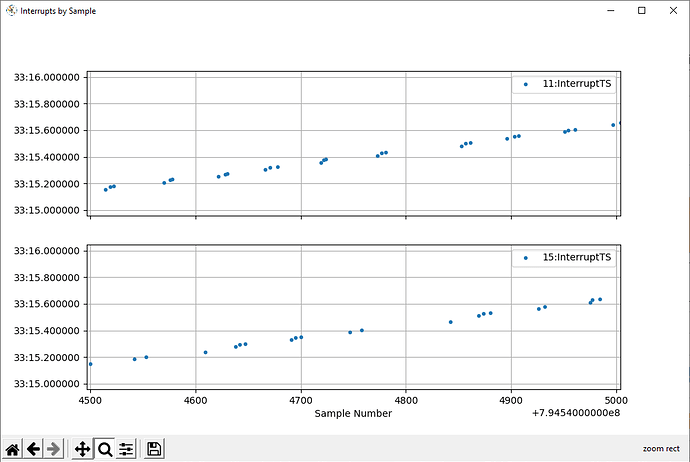 When we set our user limit to reconfigure (call UserLimitConfigSet()), we do get thousands of interrupts. But, that’s because the conditions for the user limit triggering are being met immediately after being reconfigured.

I am definitely not calling UserLimitConfigSet once for every interrupt that comes in, at least not for the user limit that triggered the interrupt. I tried connecting with WinDBG and putting a breakpoint in the RSI function RSIQVC!RSI::RapidCode::Impl::MotionController::UserLimitConfigSet as well as RSIQVC!RSI::RapidCode::Impl::MotionController::UserLimitEnableSet (just in case) and let things spin out of control. I also (temporarily) disabled calling it in the usual way (configuring the other user limit) just to see if some other thread/function was invoking it. The breakpoint never got hit even though my handler got hit a whole bunch of times.

Previously, my code was configuring a different user limit inside every invocation of a handler. However, I totally saw successive invocations of the same handler numerous times in a row before the other handler ever got invoked.

What I’m observing is that if I call the API function less often, the problem is less bad. However, I am certain that I’m not re-enabling the same user limit that resulted in this handler getting invoked, but the next time I wait for an interrupt, another user limit interrupt comes in for the same user limit (not the other one that I just configured).

Is it possible to call these functions too frequently or too close together?

Enabling a different user limit should not cause the current user limit to create another interrupt. Once again, we will try to reproduce the behavior and investigate.

We added a second user limit to our program, and in the handler for each, we enable the other user limit (by calling UserLimitConfigSet()). In the program output, we did not see consecutive interrupts from the same user limit. Can you think of anything else I can try in my code to reproduce the behavior you are seeing? When did your program stop working? Was this feature ever working or is this the first implementation you’ve tried?

I’ll try to put a minimal working example together this afternoon.